Smart Party on the Twitters

I’ve been asked a few times about creating a Hot War scenario, or the characters, or both, so I’m going to write up a half-baked demo here (done in some spare time this afternoon fag-packet style), to give people an idea about the process. If someone (or several people) want to polish up this starting point to a finished scenario, then great! Please let me know how it goes. The following kind of assumes some basic understanding of Hot War, but not too much familiarity, so without any more preamble, lets get into it:

Start with your basic idea.

There’s (potentially) a nuclear bomb in an underground bunker thought lost to Weird bombardment.
SSG are being sent to retrieve it, where others have failed.
Rumours are that the Soviets know about the location now and so time is of the essence.

Chuck some characters together. Guess at how they may be related to one another. Stick them in a diamond formation on some scrap paper. Its Hot War so they should all be from different factions. 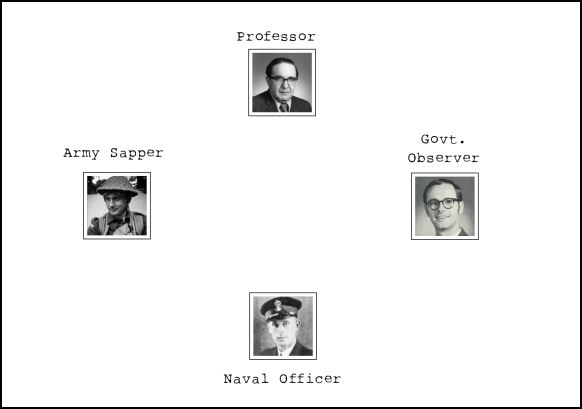 Next, in the corners, stick an NPC who could link the two adjoining characters in some, or at least be mutually known, even if the PCs are unaware of this fact. I normally at this point put in some markers for positive and negative relationships both in and out for each PC. One thing to do to help the process is to jot down ideas as they come along. They can always be changed later. In this case it seems appropriate that there should be a Soviet spy. It could be one of the NPCs, but seems much more fun to make it a PC. Lets make it the Army guy. We could equally make the Old School Network guy or gal some kind of love triangle interest or something like that. As ideas come, jot them down somewhere. 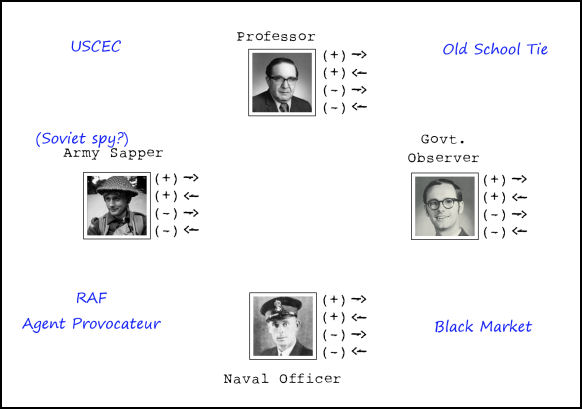 I can then start putting arrows on for relationships, ticking off a marker when one of that type is drawn (I use these just for PC to PC relationships, you could add more ticks or crosses for NPCs too if you want to keep a track of how balanced you’re being). Ideally each PC will have two or three relationships, at least one of each type, but it rarely works out perfectly. But it’s a starting point all the same. 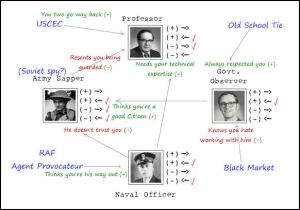 Once you’ve built up a good web of relationships (it doesn’t have to be complete yet), you can start wracking up the Agendas. I started with Factional ones, and didn’t bother giving anyone an outright “capture the bomb and bring it back” as that seemed to obvious, but they should all be different.

I then considered some Personal agendas – curious this time they started being in tune with the factional ones, rather than rubbing against them, but that could change…

Much like writing a book and constantly rewriting or revising drafts, the magic happens from now on, when you fill in what you can, go away and come back to it later. In between just run through things in your head while your waiting for the bus, in the shower, wherever. If you think of other bits and pieces, write them down or stick them in your phone (obviously not while in the shower).

It might be that as part of the refining process some NPCs change or you have to redraw your relationship diagram (I refuse to say R-Map or other “hip” phrases). But that’s all good. Tweak here and there, turn arrows around, fiddle with agendas, its all fun. Eventually you’ll get to a point where it all fits well enough, or looks interesting. There should be arrows pointing in lots of different directions. E.g. the NPC that links two characters should not be positive to both PCs, even if they’re outwardly positive to both.

The key things are: